Concertante forms, which I like, hold an important place in my catalogue. They interest me as a framework from which an original rapport between a soloist and his acoustic environment, whether it be an orchestra, an ensemble, or electroacoustics, can develop. I have drawn up a repertoire of the various possible relationships between the two “protagonists”, developed and broadened in Aura (beyond the resonances). In this work I explore relationships between the background, which is de the sound environment and the principal, incarnated by the trumpet. I resort here to mirror games, divergences, prolongations, resonances, integration situations, and mutual reactions. Moreover, I also exploit shifts between the action  and the musical matter, from which emerges a sort of counterpoint of intent.  I wrote this work taking into account the influence of jazz on the evolution of the instrument. I am aware of the richness of the timbre and the game modes. The part for trumpet is of a very great virtuosity. Different moments of the work have great force and energy. But at the same time, I wanted to show other possibilities of the trumpet that were not yet developed, like agility and flexibility which appear in the foreground.

This work is dedicated to Eric Aubier 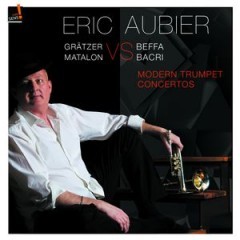